Look at me. I am so exhausted and happy at home… because I come from Agile Testing Days 2012! (Postdam, Germany).
One of the best conferences in the world for agile testers, managers and developers. It’s been my first time in this event. First of all, I want to say thank you to José Díaz, Madeleine Griep, Uwe Gelfert and the whole #AgileTD team brought by Diaz & Hilterscheid. Everything has been excellent. Everything on time, precisely calculated and performed… as if they were German! 😉

My friend Iván Stepaniuk and I landed in Berlin on monday afternoon. It was easy to get to Postdam by train. The strong chocolat smell in Postdam’s train station is the best welcome message  for two hungry geeks  🙂

At 6.30pm a bus gave us a lift from the hotel to the speaker’s dinner in a nice restaurant where food was excellent and the wine was Spanish 😉 So the networking started from minute one. I didn’t know any of the guys in the table and had a great time talking to them. Something I really appreciate is that we were back in the hotel at… 11pm? or maybe sooner, so there was plenty of time to sleep and get ready for the next day. 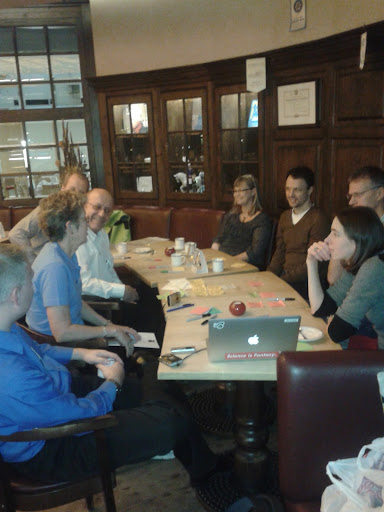 Then conference started on Tuesday at 9am but before that, Lisa Crispin facilitated an open space called “the lean coffee” starting at 7.30am for those early birds who wanted to ask questions or share experiences.  I enjoyed the time there. There was “lean coffee” also on the next two days but I was just destroyed and needed to rest.

Everyday was absolutely busy with one activity after the other and plenty of food in the hall all the time. Very handy because you don’t waste time going for food, it is always available and you eat standing on your feet having the chance to talk to people. Perfect for networking and for those like me who forget what time is the lunch supposed to be.

On Wednesday night buses took everybody to the “Most Influential Agile Testing Professional Person award” dinner. A special place where again the food was spectacular and there was an awesome magician, a beautiful acrobat (this was the music, a Metallica cover), and live music. And.. the award went to Lisa Crispin! Congratulations! 😀

One thing that grab my attention is that the majority of the speakers are self-employed, independent professionals (including myself). Some of them have been working for important companies but end up working for themselves. What do you think this means? 🙂

What I have learned

As a developer I have learned that good testers are methodical and share the same passion for continuous improvement. Developers should know something about testing and testers should know something about development. But a great developer is never going to be a great tester, and a great tester is never going to be a great developer. Both roles are necessary in teams. And the job of testers should not be placed at the end of the iteration but at the beginning. Quality products can only be developed when quality has been in place since the beginning. It is not that quality can be added at the end.
Design for quality the same way you write code for testability,… quality-first development!
I have learned that good testers love their jobs.
At this point it is well-known that the majority of the defects introduced in software have to do with people and mistakes in the communication.
Apart from this general thoughts I learned something in every talk, every keynote and every chat during coffee breaks or dinners. I tweeted some of the most remarkable sentences I listened using the hashtag #agileTD.
Talking to more experienced consultants also helped me confirm that some ideas I have work for them. And some points of view make sense to others too.

Something new I will try to apply

On my current project, the product owner come up with feature requests for the team to work on, and once they go live,  it turns out that they are not really used sometimes. But we don’t get the chance to discuss why should they be implemented. Some discussions end up with the product owner saying, “I know the business and this should be done”.
I’ll try to introduce the idea of  testing business assumptions. Design in a way that allows us to determine whether changes are really impacting the business.
I will ask … “How will we know if this change (feature request, bugfix or behavior change) as a negative or positive impact on our users?”. It is about creating business measurable software for metrics to be easy to find.
I believe these ideas come from the lean startup movement. The were expressed by Gojko Adzic based on his experiences.
Mind maps might help. Gojko proposes answering the following:

More information can be read in his latest book, Impact Mapping.

Niels Malotaux said that about 55% of the defects are in the requirements, not in the code. Someone in the room remarked that it is the 70%. So we need to work more in the iteration planning. The aim of testing is to prevent defects, not to find them.

Regarding the team, I will read this book on The Five Dysfunctions of a Team.

I will also read Lisa’s & Janet’s book, which is something I should have done time ago!

Some refletions on the state of the industry

Pretty much every keynote talked about the past. Nothing we are doing now is new, many things come from the 50’s (some of them even before) and later decades. So it’s important to leverage what we learned in the past avoiding the same mistakes again and again.  I would summarize the current status of the agile software movement in the first sentence of the manifesto: Individuals and interactions over processes and tools.
Although some attendees expected more technical talks with tools on them, the majority of speakers talked about teams, self-coaching, collaboration,  communication and design principles.

I told Lisa Crispin about my new application, LiveTeamApp. But I made the mistake of not telling her it was still a “beta” version and she tweeted about it faster than light. That encouraged me to just tell everyone about the application 🙂 Thanks Lisa!

After lunch I visited @theTestLab. where I met James Lyndsay and Bart Knaack. Professional testers and great guys. Bart and James spent the whole day in the test lab, just for the sake of serving others. To help and teach people about testing. They didn’t attend to keynotes or talks, they just focused on helping people. To me, that says a lot about them. I am happy to have met them. I proposed LiveTeamApp as an additional testing exercise for the lab and they gently accepted the proposal:

The intrepid testers found about 10 usability issues and 2 minor bugs. Big applause for them: Christian Kliebe, Huib Schoots, Simon Morley, Thomas, and my friend Ivan. Does anybody know Thomas’ surname?  I would like to link to his blog or twitter!

LiveTeamApp might be available for upcoming test labs run by @theTestLab. And is available online for any team that want to use it 🙂

Our talk on BDD applied to Javascript solutions

Daniel Maslyn is just the best chair you can have as a speaker.  Thank you Daniel!
I have to say that being the chair is not easy. I’ve also been the chair for some talks and… I don’t think I did very well (sorry speakers).

I am quite satisfied with our talk. We worked hard on the preparation, we were able to communicate what we meant, and people said it was understandable. So mission complete, thank you attendees! And thank you Ivan for accepting my co-speaker proposal, you talked very well in my opinion.
The slides will be available for download soon. The AgileTestingDays team will send the download details to all conference attendees.
I plan to write a book (this time in English with some help) on the subject, and I think we will be talking about this in more conferences (always updating the contents).  If you find the subject interesting and your English is better than mine (easy!) you can collaborate with me in the revision, just contact me please 🙂

Looking forward for next year’s conference

I highly recommend the Agile Testing Days conference. All the talks I attend to were very well prepared. Speakers presented clearly and the keynotes where fantastic.
It is a great opportunity to meet professionals with different roles and even to find a job. This year Nokia was looking for developers to hire and the information could be found at their exhibitor in the hall. So much value from a single conference.
Hope to see you there next year!